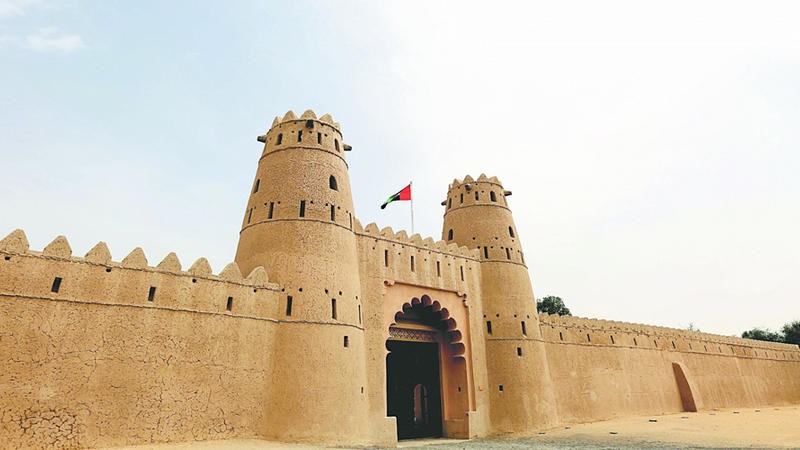 The UAE is home of tens of outstanding proud and glorious historical Castles that represent an eyewitness to the greatness of the Emirati community, cohesion of its nationals and the richness of its cultural heritage which was reflected in the diverse architecture techniques used in the construction of these Castles.
The Emirati Castles vary in shape including the circular, coned and cubic shapes. Further, they have been distinguished by the variety of the materials used in their construction according to the surrounding environment. The Castles in the coastal regions depended on sandstone, coral and marine stones, while limestone, plaster and clay were used in the desert lands, and stone was used in the mountainous areas. The Castles erected in the oases used the rocks made from clay and hay.
Seven of the most prominent UAE Castles were transformed into unique tourist destinations that take their visitors on a thrilling journey into the depths of history.
Al Jahili Fort is located in the southeastern region of Al Ain, near Al Ain Palace Museum . Its construction started in 1891 under the rule of the late Sheikh Zayed the First and it was completed in the same year. In addition to using the Castle for military purposes, it occupied an ideal location for military operations, as it is located close to water sources and surrounded by fertile agriculture land.
Visitors of Al Fahidi Fort travel through time to recognize a past that is full of trophies engraved in the national memory. This Fort that was constructed in 1787 to protect Dubai and it is  considered the most ancient building there.
Dibba Al-Hisn Fort represents a live narration of the ancient history of the city which narrates the incidents that have occurred in the region. Further, it is distinguished by its architectural character and privileged location over the hills of that region.
The Fort is one of the most important monuments in this ancient city, noting that the modern archaeological discoveries supported what the historical references mentioned about Dibba and its ancient history, confirming that it is one of the oldest inhabited cities in the UAE. The Fort was constructed using stones, clay and plaster, and it is topped with two towers in its southwestern and northwestern sides. The fence is centered by a squared section in its northern side in addition to a small squared section in the northeastern side.
Inside the Fort, there are two wells; one on the western side, next to the tower and close to a large Sidr (Lote) tree, and the second is located on the northeast side and close to another Sidr (Lote) tree, in addition to a medium-sized mosque next to them.
Masfout Castle is located on the northern border of Masfout region, 120 kilometers southeast of Ajman. The castle was built by stone, clay and local timber and it consists of two rooms and one gate. In late 1940, the tower-style castle was restored at the request of the late Sheikh Rashid bin Humaid Al Nuaimi.
Falaj Al Mualla Castle was built in 1800 approximately in Umm al Quwain and it consists of a squared building with two towers on the northeastern and southwestern sided, a large majlis with lobbies overlooking an internal courtyard in addition to many watchtowers.
In 2015, the Castle witnessed an overall restoration in addition to a museum that embodies the ancestors’ legend and the past of the region.
Built in the sixteenth century, Dhaya Castle is one of the most important castles in Ras Al Khaimah as it was erected on the top of a high hill overlooking the Arabian Gulf, and was surrounded by a rocky fence stuffed with gravel to form a flat surface. The architectural type and location selected by the inhabitants for the Castle reflect the defense mechanism adopted by the Emiratis to protect their land, as the Castle, restored in 2001, is considered the only fort that still exists on the top of a hill in the state.
Fujairah Fort is one of the most distinguished forts in the UAE and it was built on a high hill in the ancient Fujairah area and its building rises to about 20 m. above sea level.  The Castle that was built in the period 1500 -1550 witnessed many circumstances that led to collapse and damage of its walls and it was rebuilt in the period 1650-1700 before its first renovation in 1925 and second renovation in the mid-sixties. In the period 1998-2000, the Department of Antiquities and Heritage made a comprehensive restoration of the Castle and its towers.