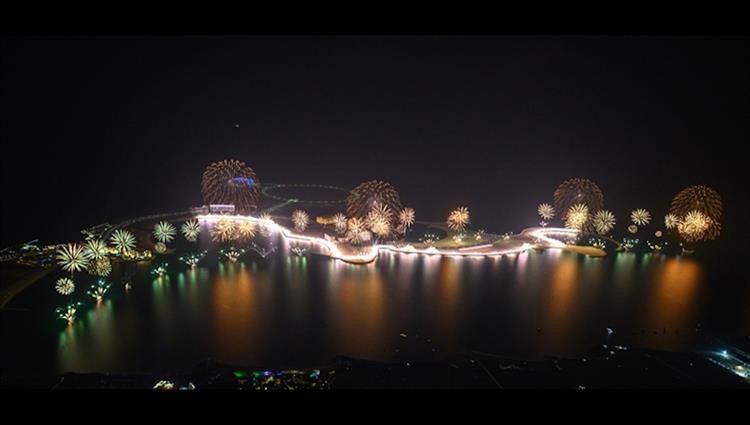 During the 2020 New Year’s celebrations Ras Al Khaimah caught special global attention, setting two new Guinness World Records for “most unmanned aerial vehicles for launching fireworks simultaneously” and “longest firework waterfall” at 3788.86 meters.
Hundreds of thousands of visitors, including tourists from all over the world, witnessed the exceptional 13-minute long fireworks, with live online broadcasting and coverage from major TV networks worldwide.
Further cementing the Emirate’s position as the Gulf Tourism Capital 2020, Ras Al Khaimah set a historical achievement by breaking two new world records, in the presence of official adjudicators from Guinness World Records, increasing the number of world record titles for fireworks shows hosted by the Emirate to five in just three years.
The first record was for the captivating firework display using 173 PyroDrones simultaneously. The fireworks ushered in the New Year by creating a visual ‘2020’ in the sky followed by an elegant chandelier draped with a cascade of pyrotechnic sparks ending with the recreation of Ras Al Khaimah’s monuments
The record for the ‘Longest Fireworks Waterfall’ at 3,788.86 meters trumped the existing one set in Fukuoka, Japan, which was for a length of 3,517.23 meters.
In order to break the record, the size of fireworks used had to beat least 28 cm long and 3 cm in diameter. Furthermore, the fireworks had to be hung across 3788.86 meters length, to insure providing a spectacular show in the end of the New Year's Eve event.
Crowds thronged the main venue of Al Marjan Island, the flagship lifestyle development by Marjan, the master-developer of Ras Al Khaimah, from early in the evening as well as at viewing decks along Al Hamra.
The event included a wide variety of family - friendly activities, such as food trucks and DJ music, tailored to entertain the guests before the start of fireworks shows. For the first time, Ras Al Khaimah also hosted a New Year’s Eve Gala Dinner headlined by multi-Platinum singer, songwriter, and fashion icon, Najwa Karam, and celebrity singer Waleed Al Shami.
A spokesperson of the Higher Organizing Committee said: “the New Year’s Eve Gala caught the world’s attention and welcomes hundreds of thousands of attendees.
“The event underlines the vision of Ras Al Khaimah’s leadership to position the emirate as one of the world’s first choices for New Year’s Eve celebrations, by focusing on disseminating the values of peace and happiness and positivity from the UAE to the world”. He added: “In addition to setting two new Guinness World Records for fireworks shows, we are confident that this major event will firmly establish the Emirate’s position as the ideal destination for tourism, retail and entertainment across the region, offering exceptional opportunities for investors to work, live and entertain. I would like to extend my thanks and appreciations to our partners, and to all those who have contributed to the outstanding success of this year's celebrations”.
The fireworks shows and other activities were broadcast on raknye.com for billions of spectators around the globe, in addition to live coverage from major regional and global TV networks.
The great success of New Year’s celebrations in Ras Al Khaimah was the result of close collaboration between many parties, including Marjan company, Ras Al Khaimah Police, Ras Al Khaimah Tourism Development Authority and RAK Chamber of Commerce and Industry, and more.
Celebrations activities are available to watch on www.raknye.com, or on Ras Al Khaimah Government Media Office’s social media channels @rakmediaoffice.
In 2019, Ras Al Khaimah's NYE event set two Guinness World Records titles - for the 'Longest chain of fireworks' and for the 'Longest straight line of fireworks'. The 2018 celebration set a new world record for the 'Largest aerial firework shell'.